On Saturday, March 16th, young scientists from around Monterey County gathered at California State University Monterey Bay for the annual Science and Engineering Fair.  Gathered with them were science professionals from surrounding communities who served as judges for 260 student projects.  Included among the judges were scientists from Stanford’s Hopkins Marine Station and CSUMB’s Watershed Institute who were there once again to find this year’s winners of the Water For Our Future award.

With guidance from Drs. Doug Smith (CSUMB) and Carol Reeb (Stanford), our team of graduate and undergraduate students assessed the merits of sixteen water-related projects and selected a short list of the top four contenders.   Our team’s expertise included marine science, aquatic ecology, geology, hydrology, and conservation biology.   After thoughtful discussion and debate, the judges unanimously decided upon the winners.

This year’s Water For Our Future award goes to Suheib Ibrahim and Owen Nakazono from the International School of Monterey.  Their project titled, “Got Water,” began with a simple but essential purpose, to find the “most efficient and cheapest way to purify water.” Noting that commercially available water filters in pitcher systems from PUR or Brita can range in price from $5 to $10 each, these scientists looked to all-natural, biologically “organic” plant byproducts (banana peels, coconut husks, or fresh cilantro) to replace the more expensive activated charcoal filters sold in stores. 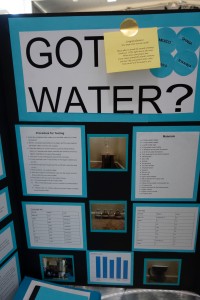 Three homemade filters were made from inverted plastic beverage bottles (bottom cut off).  They were filled halfway with layers of cotton balls, pebbles, and sand.  Atop this was added layer of  “organic” plant material from banana peels, cilantro, or coconut husks.

Two water sources were sampled and tested for conductivity (a measure total dissolved salts) and color (a measure of suspended solids).   These tests are good indicators for water pollution. Acidity was also measured.  The water sources used for testing were distilled water (which has no contaminates and served as a control) and urban pond water collected near Dennis the Menace Park (Lake El Estero).  The pond receives urban runoff via three inflowing streams.  It also is a year-round habitat for a number of waterfowl.  In other words, it has a lot of dissolved salts and suspended solids that give it a murky appearance.

Water samples from each source were poured into the PUR and homemade water filters.  The filtrate passing through each was collected and sent to a local lab for conductivity, acidity, and color testing.

The results showed all three organic filters had varying levels of water purification performance depending on what organic material they contained.  The PUR filter worked best at removing color and salts from the pond water.  However, the next best filter was the one made of cilantro.  The filter made of coconut husks had the worst filtration performance.

These students impressed the judges with their worldview of water shortages facing not only California, but Mexico and countries in Sub-Saharan Africa as well.  What especially caught the attention of our marine scientists and hydrologists was the connection this project revealed between wetlands and water purification in the natural world.

Although Lake El Estero is a freshwater pond today, a few hundred years earlier it was part of a much larger brackish water wetland.  This wetland filtered stream and river flows before they poured into the sea.  This filtration helped keep the Monterey Bay clean and healthy for fish and other marine life that the native Ohlone people relied upon for food.   For example, during heavy storms rainwater can erode soil and send muddy water rushing to the sea where it pollutes nearshore waters, enhances harmful algal blooms, and may create fish kills.  Wetlands, however, stand between rivers and sea.  Plants in and around wetlands, both living and dead, become “organic” filters that remove suspended and dissolved solids during storms and inhibit pollutants from entering the Bay.  In this way, the Bay remained healthy for thousands of years.  Nowadays, those wetlands are gone.  In their place are municipal storm sewers that attempt to do the same thing, but at a much higher price.

So aside from showing us that organic plants have potential for one day replacing activated charcoal filters with less expensive “organic” components, our award winners also recreated the concept of wetlands in a bottle. As one of us noted, “That project was pretty amazing.”

Congratulations to Suheib and Owen of Monterey’s International School on their impressive application of water science to help solve a water problem in the future!