Congratulations to Seth Madden and Avery Danielsen from York School for their impressive environmental engineering projects aimed at improving water quality and supply for our future!

Seth Madden of York School stands before his winning poster showing how fog capture designs from nature can be engineered to collect more water.

There are many places around the world where animals and plants survive in climates much drier than our own here on the Central Coast of California. Take for instance the Namib Desert of southern Africa, which receives only 19 milliliters (or ¾ of an inch) of rain each year. For comparison, Monterey averages 500 milliliters (19.5 inches) annually. Fortunately, the Namib Desert is located adjacent to an ocean.   And just like Monterey,  this desert gets a lot of fog.

Seth gained an interest in Namib Desert animals and plants.  He reasoned that species found there must have perfected the art of fog collection over millions of years of adaptive evolution in order to survive the harsh conditions. He imagined that if we could replicate efficient fog capturing designs found in desert species, we might be able to help coastal communities make use of fog to supplement their water supply.

Seth began by learning how water-attracting bumps on the backs of desert beetles (Genus: Stenocara) condensed moisture that then flowed along waxy channels to their mouths.  ( Click here for a photo of the Namib Desert beetle in action).  He read about how long grooves etched in blades of desert dune grasses (Genus: Stipagrostis) guided water droplets to plant roots. He realized desert cacti used a similar, but slightly different method to do the same. Based on his readings, Seth constructed three fog-collecting mesh models that mimicked beetles, grasses, and cacti.  He compared water collecting efficiencies of his models to one using a man-made mesh found in conventional fog nets.

Seth replicated his models three times and measured average water volumes each collected over thirty days. At the end of the study he found that mesh patterns mimicking nature’s desert designs recovered more water, in most cases, than a conventional fog net. In fact, cacti and beetle models seemed to work best. Our judges were thrilled to listen to this young scientist explain in detail how biomimicry could be used to engineer better fog capture devices. Congratulations to Seth for garnering insights from nature that could one day help supplement California’s water supply!

EDITOR’S NOTE: California’s coastal redwood trees rely extensively on fog. Long, flattened leaves catch atmospheric moistures as it rolls in from the sea so it can drip onto roots during the long, dry summer. The oldest redwood in Monterey County grows in the Santa Lucia Mountains. At 150 feet tall, it is thought to be at least 800 years old, which means it has survived a lot of droughts, thanks to its ability to collect fog.  Check out an article in the Monterey Co. Weekly HERE. 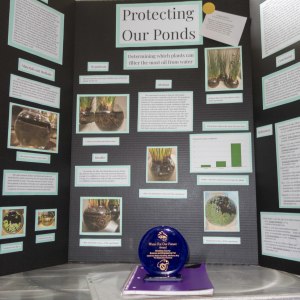 Avery Danielsen’s award trophy is pictured next to her winning poster. Unfortunately, she could be at the awards ceremony.

Leaks and spills from cars, damaged pipelines, or storage tanks allow toxic motor oil to find its way into roadside ponds and lakes, especially after storms. Over time, these toxins can accumulate to harmful levels for aquatic life. Avery began her presentation by telling us how urban aquatic habitats, especially those near roadways, are at great risk of oil contamination.  Because traditional methods of oil cleanup (dredging or draining) often cause even more harm to aquatic life, she sought ways to mitigate oil contamination without stressing organisms further.  Her idea was to harness the power of plants.

Avery chose two plants for this purpose; the Blue Dart Rush (Juncus inflexus) and common duckweed (Lemna minor). Both species tolerate immersion in water and each can be purchased at garden shops.   Avery planted duckweed and rush in replicate “ponds” made from glass tanks. Control samples (without plants) were included.   An equal volume of used motor oil was added to each tank and the depth of the oil layer was measured over time to see how much disappeared.  By the end of her experiment, Avery found that “ponds” with blue rush had less oil than duckweed or controls.  Although the oil eventually killed all the plants, she noted that the rush plants could tolerate oil much longer than duckweed. She concluded that Blue Dart rush was a better plant to clean up oil than duckweed.

Because the Blue Dart Rush originated in Europe, not California, the judges wondered if native wetland plants might be useful for oil cleanup too. Certainly, California is full of natural oil fields, some of which have been heavily exploited for decades. We entertained possibilities that some of our own plant species might be of service for roadside pond clean up.  This project embraced the emerging field of phytoremediation that is gaining ground as a less impactful way to restore aquatic ecosystems.   Congratulations to Avery for her forward-thinking vision to help keep California’s surface waters clean for our future!

Young scientists and judges alike found ways to shine at this year’s Monterey County Science and Engineering Fair despite Saturday’s stormy clouds and periods of heavy rain. With nearly 300 projects presented by more than 400 students competing for category and special awards, selecting this year’s Water For Our Future winners took us on an exciting and scholarly journey to a final destination – our unanimous decision on this year’s winners.  Thanks team!